(the publication of historical sources and chronologies)

During the past two decades there have been parallel investigations pursued on different Hungarian minorities, with different degrees of intensity. This project therefore aims to fill in systematically the gaps of the missing chronologies and primary source publications, thus providing a solid basis for future monographs and syntheses. The history of the Hungarian minorities can be best interpreted in the context of the dynamic interaction of different factors, such as the common Central European social and political developments, and the governmental, political, economic, cultural aspirations of both Hungary and its neighbouring countries.

Researches so far have largely been focussed on some segments of cultural and institutional history as well as forced migration, and anti-ethnic reprisals. However, an overall framework is still to be created, that could provide a proper place for these partial results, and would clearly show those unresearched areas that would enable the history of the minority to be incorporated into both the history of Hungary and those of the neighbouring states. In order to fill these gaps it is vitally important to explore the historical resources (without them no further progress can be made in any field), and to prepare historical chronologies that would provide solid thematic and structural frameworks for all records. This kind of work could be effectively done only by a focused research project with a solid institutional background. The Institute for Minority Studies within the Centre for Social Sciences of Hungarian Academy of Sciences (MTA KKI) is a prominent institution for any research on the Hungarian communities from the neighbouring countries, having its own extensive network of both institutional and personal contacts needed to coordinate and finalise such a large-scale project. General works published about any of the regions concerned are rather rare because of the deficient and uneven exploration of the sporadic sources. It is important to underline that the first overall synthesis on the history of the Hungarians from the neighbouring states was conceived and published in 2008 under the aegis of the Minority Research Institute (Kisebbségi magyar közösségek a 20. században). Its English, enlarged edition was published in 2011: Hungarian Minority Communities in the 20th Century. The volume was one of the reasons why according to some scholars “ nowadays minority research became one of the most advanced branches of history”.  (http://mta.hu/tudomany_hirei/kisebbsegtorteneti-konyvek-72731/ - see also the article of Romsics, Ignác: A magyar történetírás intézményrendszere és fórumai. Aetas, vol 2010. issue 4. pp 9-10.)

It is important to note, that the exploration of the archival materials of the Hungarian minorities abroad is not just a mechanical task. It is only experienced researchers who can investigate and use the unknown documents in order to present them fully, authentically, and in their interconnectedness. In most cases these are not frequently researched files like those of the Minority Department of the Prime Minister’s Office (fond K28 of MOL, the Hungarian National Archives). This could be done only if the whole set of the archival papers stored abroad could be copied, but that would cost far more than the sum we are applying for. However, for the future it seems indispensable to develop an overall digitalised documentation including the holdings of the foreign archives too, offering thus a much broader selection, than the one we plan to publish within the framework of this project.

The table below provides an overall view on the present state of Hungarian minority publications, especially those of the sources and chronologies published so far. (In the Bibliography one can find a detailed list of publications, according to genres.) It clearly shows the gaps we wish to fill by our project. 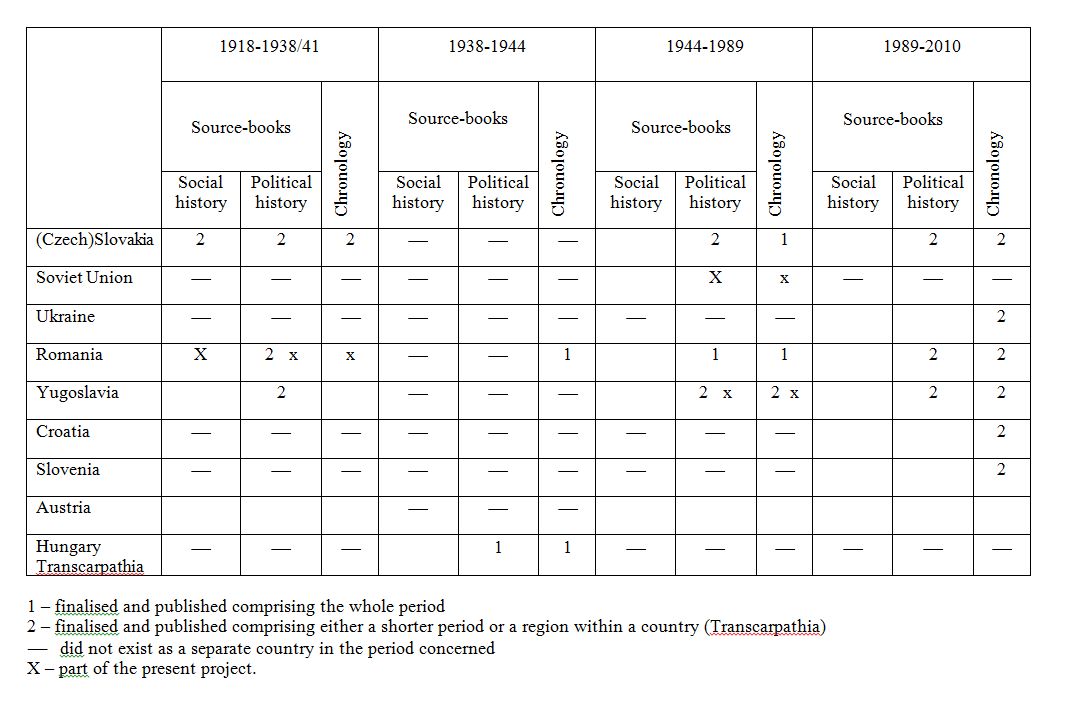 The bibliographical data of these works can be found below in the list of Literature, and on the websites of OSZK MEK, foruminst.sk, and adatbank.ro.

2. Hypothesis, key questions, the aims of the project

The scientific novelty of the research, among others, would be a new perspective through which the minority policies of the Hungarian governments could be seen in a broader political context, and at the same time (by the help of the subject-headings) one could empirically compare the way ethnopolitical problems were handled before and after WW2 – in totally different political-ideological periods. As for the self-knowledge of the Hungarian communities from the neighbouring countries, they would gain a systematic presentation of basic facts according to a scientific methodology. Thus we would be able to present minority history as a part of the overall political, social, and economic context, instead of the narrow perspective of discrimination and reciprocity.

Our goal is to focus on the problems relating to the institutionalisation of Hungarian minority communities, and not its narrative of decline. The project will present the impact of communal, institutional processes – revealing thus part of the history of the respective neighbouring country as well.

3. The methods of applied research – new and old sources

The project would be primarily based on archival sources. As secondary sources we plan to explore the materials of the press and press agencies. Each item would be double-checked by comparing it with other sources. Special care will be given to the reconstruction of the legal and institutional changes as well as to the verified social (statistical) index numbers of some special regional and minority populations.

Hungarian National Archives (MOL), Papers of the Ministry of the Foreign Affairs (KÜM), Hungarian Embassies in Belgrade and Moscow; Papers of the central bodies of the MDP/MSZMP (Hungarian Communist Party 1945-1989).

- Prágai Magyar Hírlap 1920-1938, the analysis of its major political information (not as an exhaustive repertory)

The main subjects to be searched: - laws and decrees - political events - the history of organizations

Preferences: The research of course should be primarily focussed on events with nationwide importance. However, due to the special nature of the subject one cannot ignore some data and events on regional level. The aim is to select and edit approximately 80-120 chronological entries per a year.

For the proper description of the resources a standard formula elaborated especially for this purpose will be used (publication of texts, format of notes, references of sources, subject-headings, annotations, indexes). In the case of chronological entries we plan to use similar standards for all the articles (event, source, subject-heading, indexes).

Wherever “documentation” is mentioned, it means the annotated, searchable publication of the texts in pdf format on a DVD.

Chronology: annotating the items of literature.

The documentation of the Bernády legacy

Editing an index of sources.

Editorial work on the book The Historical Chronology of Hungarians in Vojvodina, 1955–1974.

The documentation of the Bernády legacy

Editorial work of the book Without historical alternatíves. Papers related to the inter-war history of Hungarians in Romania.

Editorial works of the book The Historical Chronology of Hungarians in Romania, 1918–1940.

The documentation of the Hungarian National Party’s legacy

1. Without historical alternatíves Papers related to the inter-war history of Hungarians in Romania (by Nándor Bárdi)

2. As we could… The society of Hungarians in Romania between the Two World Wars (Nándor Bárdi)

1. Minority policies beyond the Carpathians. Papers on to the history of Hungarians in Sub-Carpathia, 1944-1989 (by Cs. Fedinec)

5. The Hungarian-Speaking Jews of Slovakia 1918-1938, a collection of documents, with an essay (Veronika Gayer, Tamás Gusztáv Filep)

3. The Historical Chronology of Hungarians in Transcarpathia, 1944–1991 (by Cs. Fedinec)

1. A detailed and annotated list of sources will also be prepared containing all basic documents concerning Hungarian minorities in the period (cf. the table). Index, title, date, content, extent, subject-headings, status of treatment. (cf. sources). This will also be available online by the website: mtaki.hu. (Nándor Bárdi, Réka Marchut)

2. The manuscripts will be first published in separate volumes (each will be approximately 20-25 sheets). Later they will be made available through an online database too.

3. The chronologies will be in cross-referenced databases.

4. The paper Prágai Magyar Hírlap will be available on the internet as a cross-referenced index.

5. The documentation of the files of György Bernády, György Bethlen, and the Hungarian National Party (Nándor Bérdi, Réka Marchut)

5. Research infrastructure (members of the project: researchers and auxiliary staff)

Members of the institute:

6. Bibliography. The project is its sequel (publications of the applicants in this topic (see the table)):