Nyitóoldal Hírek Social and Economic Vulnerability of Roma People. Key Factors for the Success and Continuity of Schooling Levels

Social and Economic Vulnerability of Roma People. Key Factors for the Success and Continuity of Schooling Levels 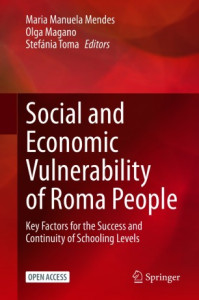 Abstract. This chapter explores the upward social mobility trajectories, and the corollary prices of them for those 45, first-in-family college educated Roma in Hungary who come from socially disadvantaged and marginalised family andcommunity background. We argue that among the academically high-achieving participants of our study the most common upward mobility trajectory, contrary to the common belief of assimilation, is their distinctive minority mobility path which leads to their selective acculturation into the majority society. This distinctive incorporation into the mainstream is close to what the related academic scholarship calls the‘minority culture of mobility’. The three main elements of this distinct mobility trajectory among the Roma are (1) The construction of a Roma middle class identity that takes belonging to the Roma community as a source of pride, in contrast of the widespread racial stereotypes in Hungary (and all over Europe) that are closely tied to the perception of Roma as a member of the underclass, (2) The creation of grass-roots ethnic (Roma) organizations and (3) The practice of giving back to their people of origin that relegate many Roma professionals to a particular segment of the labour market, in jobs to help communities in need. However, we argue that in the case of the Hungarian Roma, these elements of the minority culture of mobility did not serve the purpose of their economic mobility as the original concepts (Neckerman et al. Ethnic and Racial Studies 22(6): 945–965, 1999) posits, but to mitigate the price of changing social class and to make sense of the hardship of their social ascension.

This paper is based on the analysis of the Hungarian National Assessment of Basic Competences (NABC) database which has been conducted annually since 2001. We created a typology of school resilience based on the schools’ social and ethnic profile as well as their performance indicators. We defined those schools resilient which over perform others with similar social intake, and we also identified irresilient schools which underperform others with similar social intake. The school types were created by correlating the socio-economic status index (SES) and school performance.

Since the NABC database provides us with data on the estimated rate of Roma students in each school, it is possible to take into account the schools’ ethnic intake in the analysis of resilience. We conducted statistical analyses to compare the performance of resilient and irresilient schools in the light of the ratio of Roma students. Finally, we seek answers to the question whether ethnic segregation correlates with school achievement in Hungary. We could identify some crucial institutional factors contributing to resilience (or school success) in the case of schools with relatively high proportion of Roma students.